Checking in your bags will soon be easier than ever. British Airways will be the next major airline to roll out RFID luggage tracking for its passengers. Travelers with a ViewTag can tag their bags before even arriving at the airport. Via engadget… In case you missed this article on Southwest Airlines Network Operations Center, Training Cabin, and Listening Center.  A rare behind the scenes look with amazing pictures and narrative
Check it out on CNET
Hat tip to David Gray for sharing.

Starwood is rolling out robotic room service at their properties ready to drop off your $35 cheeseburger and fries.
From Gulliver: “The butler known as a “botlr” is being tested in its Cupertino hotel in Silicon Valley (naturally) with a view to expanding its presence worldwide. Botlrs come complete with bow ties and resemble a cutesy cross between Disney’s Wall-E and R2-D2 from Star Wars. As well as having novelty value, they are capable of delivering room-service orders by navigating lifts and corridors before dialling the occupant’s room number to announce their arrival” 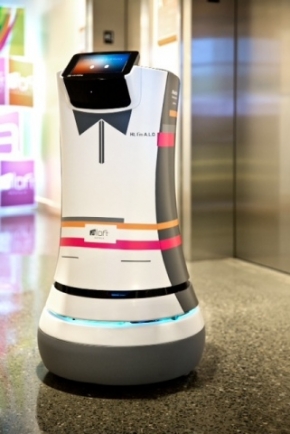 Check out this great chart of airline fees posted by SmarterTravel.com.  Even has a handy-dandy PDF for download

Check out this awesome visualization of a day of flights across the Atlantic.

Ready to be flown by a pilot that is controlling the airplane with their mind?
Well that concept is on its way to an airplane near you.  Now you need to worry about turbulence and headaches.
Read more here Check out the blog Holding Pattern to see the beauty of airport runways.

Tnooz has an article describing Google’s need to balance speed with accurate pricing data in it’s integration of hotel rates within Google Maps.
This tool is designed to rapidly engage a Google Maps user with hotel pricing. Google has chosen to use cached rates with no live inventory searches In order to ensure the speed of results which made Google the leader in search.
While this may expose users to more frequent pricig errors, this decision will most likely not damage the impression of accuracy amongst individual users. Google will benefit since they are simply a gatekeeper for the rates. Users that find sold out rooms or rate discrepancies will more than likely be frustrated with the final point of sale rather than Google.
I liken a Google’s cached-rate with no availability to the advertised rates promoted via other email campaigns. Since this is likely tone a growing entry point for direct hotel channels I would not be surprised if this forces revenue managers to rethink the speed at which they update their rates.
Read more over at Tnooz.
http://www.tnooz.com/2011/03/09/news/google-maps-to-deliver-hotel-rates-fast-as-lightning-but-how-accurately

American has been fined $90,000 due to failure to disclose the true cost of using vouchers they give away at the station. Appears that these vouchers couldn’t be redeemed online – only over the phone with a fee.
Read more at Tnooz
http://www.tnooz.com/2011/03/08/news/american-airlines-fined-over-lack-of-transparency-on-overbooked-flights

The AP has an article into the ongoing investigation into price fixing amongst 21 Airlines.  No US airlines have been identified as being part of the alleged collusion.
http://www.npr.org/2011/03/06/134309983/21-airlines-fined-for-fixing-passenger-cargo-fees?ft=1&f=#fb